Wage Against The Machine: the effects of minimum wage in payroll 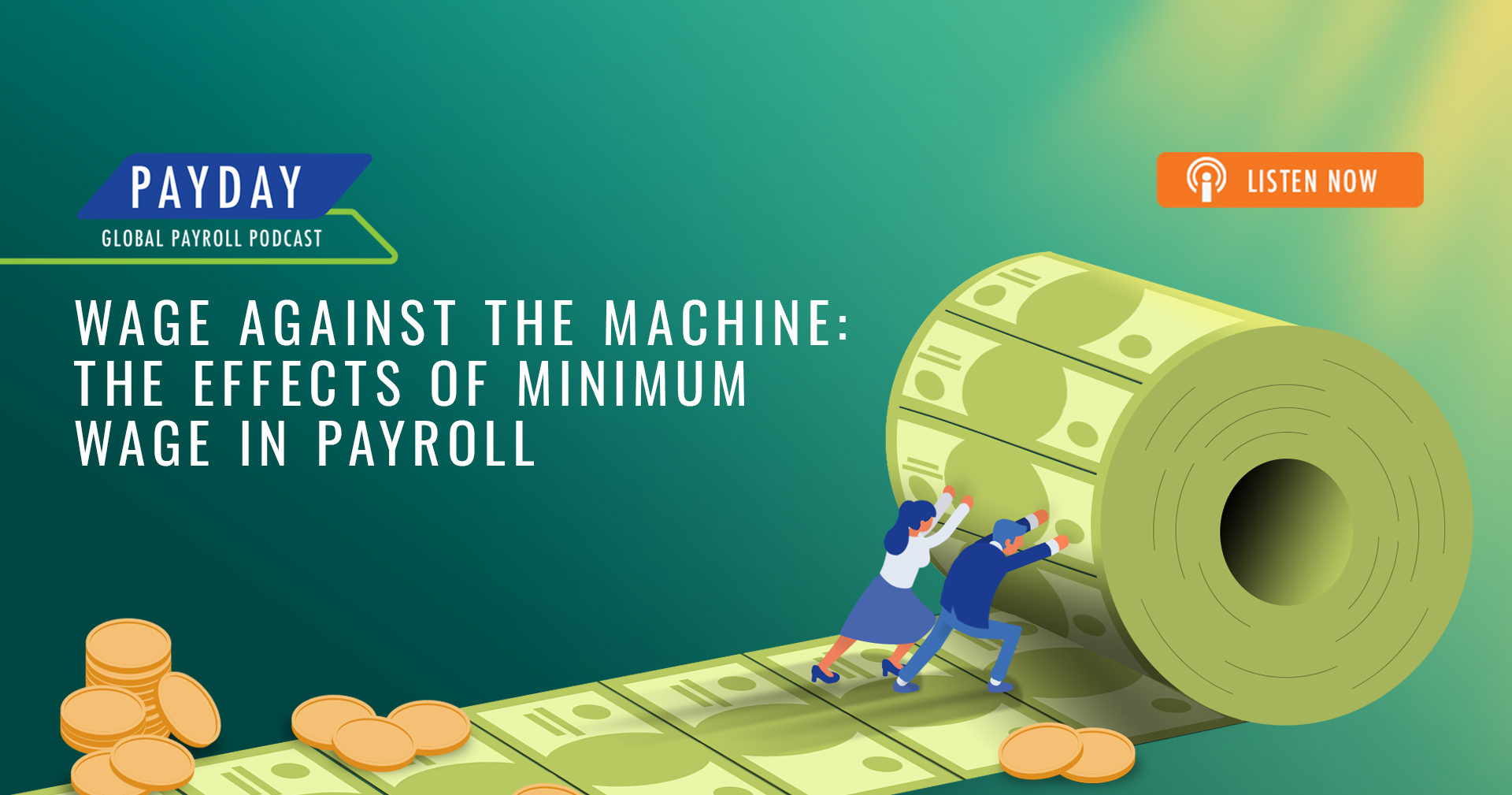 Amid a business landscape reshaped by the pandemic, and the resulting economic pressures affecting millions of people worldwide, how much people are paid is very much in the spotlight. This is especially so in the United States, where a significant rise in the federal minimum wage is front and center of the political agenda right now.

But how are labor costs being affected by the world we’re currently living in? To what extent is location playing a bigger role in who works where, and for how much? And is raising the minimum wage necessarily a positive change for everyone?

These issues around minimum wage in global payroll are covered in the latest edition of the Payday Global Payroll Podcast. In it, John McFarland, SVP of Client Development at HR experts Vensure, shares his take on the key issues at a time of real change within the sector. In particular, he focuses on six vital considerations.

While many countries and territories are currently raising their minimum wage — including in the United Kingdom and in more than half of the 50 US states - rates still vary considerably across different economies, and even within the same economy in the case of California.

As John explains, this poses serious challenges for larger organizations to coordinate their minimum wage in payroll: “You may have a business in Orange County with one minimum wage, but then you send your employees to LA City to do work. You then have to pay them the LA City minimum wage. These are little nuances that trip up employers because it doesn’t make sense logistically.”

2. The Fight for $15 has payroll consequences


By 2022, only around one in six Americans will live in a state with an hourly minimum wage of $15 or more. This demonstrates how the ‘Fight for $15’ movement, which would bring the minimum wage up to that level for all Americans, will have major knock-on consequences.

“$15 an hour in New York City? Probably not enough to live,” John says. “$15 an hour in Mississippi? Probably well enough to live, but what’s that going to do to the local economy? How’s that going to hurt the small businesses in smaller communities where, because of your location, you’re not going to get an influx of new customers? You’re going to be forced to pay a higher wage… how do you survive? Something has to give.”

John goes on to say how the unintended consequence of raising a minimum wage could be putting employees in small businesses out of work: “Does it mean I have to lay people off? Pull back benefits? Nearshore or offshore? Shut down completely? There are significant factors at play.”

Similarly, John suggests that any potential application of a global minimum wage could result in large corporations moving operations into places where they can make savings in other areas:

“If you’ve got a global minimum wage, you’re still going to have to focus on things like the cost of materials, transportation and so on,” he says. “That’s positive for large corporations who can do that but it’s really negative for the smaller businesses that simply don’t have that ability.”

In a climate where 19 percent of all wage earners globally get their statutory minimum wage or less, it highlights how bringing rates together worldwide is not a simple undertaking.


Those earning low wages were already under financial pressure, but the economic shock of COVID-19 has only exacerbated this. PwC has found that 38 percent of full-time US employees have less than $1,000 in savings to deal with unforeseen costs, rising to 62 percent among Generation Z.

“If their refrigerator breaks, the need for funds is right now, not a week from now or two weeks from now when they get their paycheck,” John says, as he makes the case for earned wages. “Having the software that does it automatically or having a third-party provider that actually makes it an automated process, is definitely a huge benefit to keeping track of that. I like the concept because, you know what? Life happens.”


“There’s a big movement towards Colombia, Guatemala and El Salvador where you can hire the back-office positions from accounting to HR to payroll processing,” John says, pointing out that the trend for more virtual and remote working means that employers can cast the net far and wide to find savings in certain areas. “What’s the difference if the employees are remote in the United States or remote in South or Central America? I think it will encourage companies to look at the global economy more.”

Keeping track of changes and complexity around minimum wage in payroll around the world can be hugely challenging for every type of business. Most HR and payroll teams have enough to do to keep the plates spinning in one territory without having to worry about countless others. As John says: “You are required to know everything and it’s not readily available all the time. I do this for a living and trying to find the information is like pulling teeth sometimes!”

This is where the help of a third-party expert can help in so many ways. Not only through the technology and expertise that they can provide, but also in lightening the load on in-house staff so they have more time to innovate. John sums up by suggesting that this outsourced approach is the way forward: “I don’t have to worry about that particular country’s legal aspects of HR and payroll because that company handles it. I just pay the invoice.”

Minimum wages are often hailed as a major positive step in helping businesses connect better with their workforces and in lifting people all over the world out of financial hardship. But it’s clear that trying to solve problems by raising minimum wages isn’t as simple as it sounds.

Nevertheless, however different authorities decide to proceed with their minimum wage policies going forward, it will remain essential for businesses to stay compliant with all relevant requirements. For larger corporations that operate internationally or across multiple territories, this can be a complex undertaking that may well require the help of global payroll solutions and an expert third-party partner.

To learn about minimum wage in payroll and the role of global payroll solutions in more detail, access the full recording here.