Understanding Payroll in Sweden: What Global Companies Need to Know About Sweden Payroll 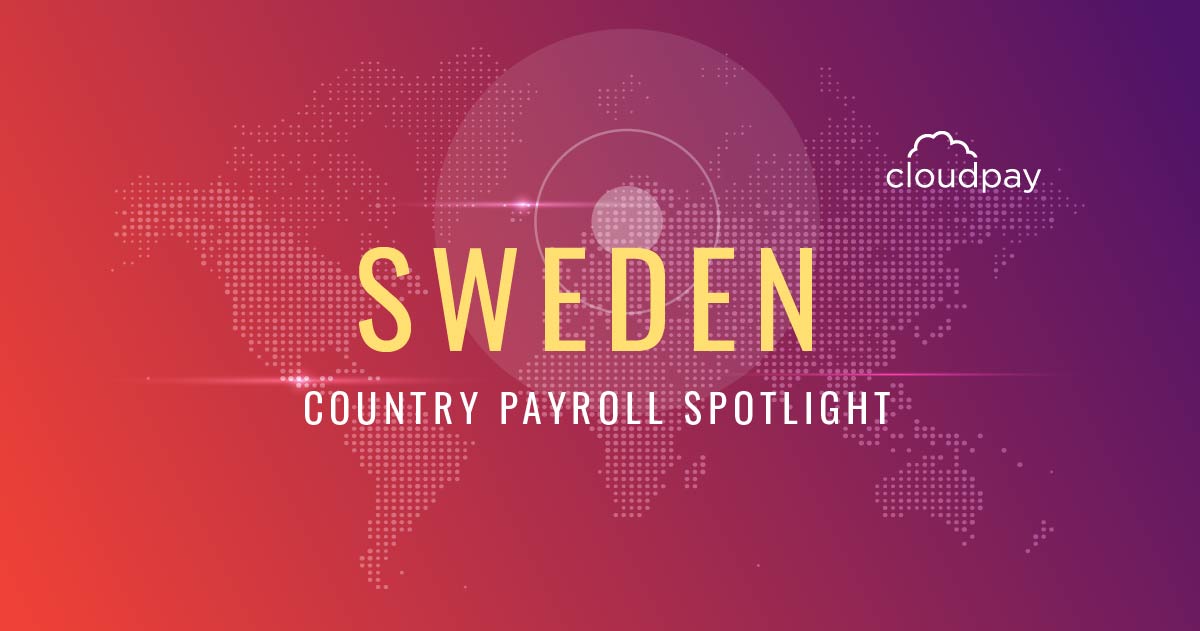 Sweden is a country with a population of just over ten million people, but represents a strong opportunity for foreign businesses, thanks to its solid economic growth, robust education system, and high standard of living.

This dynamic European Union member state has a $520 billion economy as of 2019, and although growth has slowed to 1.2 percent, its rate of growth was in keeping with many other major European economies prior to the COVID-19 pandemic.

Sweden is well-known for its generous work state, labor force stability, and internationally integrated and strong labor unions. Also named the EU’s leading country for innovation in 2019, Sweden is highly regarded as a top nation for international business.

With a current flat rate of 21.4 percent, Sweden’s corporate tax rate is lower than in many other western European countries. A large number of multinational companies have taken advantage of this, opening offices in Sweden and using it as a gateway to business in Scandinavia, the Baltic Sea region, or the EU.

Though consumer debt in Sweden is nearing 90% of GDP, Sweden remains an attractive location for foreign entities to seek partnerships or to develop new markets. But before doing so, it’s essential for any business looking at Sweden to familiarize themselves with the fundamentals of Swedish payroll:

Expanding into Sweden begins with registration of the company, business name and employee headcount with the Swedish government’s company registration office Bolagsverket. This process usually takes 2-4 weeks, but the Bolagsverket constantly updates its processing times online to provide a more exact timeframe.

Organizations need to obtain certification from a Swedish bank that a cash amount (for the payment of company shares) has been deposited into an account. The minimum amount required has been reduced to SEK 25,000 (approximately £2100, $2700, €2400) for private limited companies founded from January 1 2020 onwards. However, companies do not have to use a Swedish bank account to make payments to employees or tax authorities.

From there, the entity will need to register with the Swedish tax office Skatteverket. A foreign enterprise is required to submit a tax application (form SKV 4632B) in order to apply for:

Companies operating in Sweden who do not have permanent establishments there are not liable to pay tax on their business income.

Laws protecting employees are strong in Sweden, and are administered under the country’s Employee Protection Act, Annual Leave Act, the Working Hours Act.

These laws define a standard working week of 40 hours in Sweden, but also place caps on overtime. No employee can work more than 50 hours of overtime in a calendar month, or more than 200 in a calendar year. The same caps also apply to time spent on-call. Overtime is usually rewarded with an additional 50-100% of pay on top of the employee’s standard rate.

Unemployment is relatively low in Sweden (declining to 6 percent by December 2019) and contracts between employees and employers are not a legal requirement. There is no legal minimum wage in the country, though salaries are often negotiated by collective bargaining between employers and trade unions or independent worker groups.

Sweden enjoys a well-educated workforce, generous employee benefits, and easy accessibility to European workers under EU movement of labor laws. These mean businesses in Sweden have little difficulty in recruiting talented staff from inside or outside the country.

In keeping with its other relatively liberal working regulations, Sweden does not apply any specific restrictions around the awarding of either contractual or discretionary bonuses for any companies except for banks and other credit institutions. Bonuses paid in cash are taxed at standard rates (see below). Any employees that are made redundant or laid off remain entitled to their full salary and other contractually defined benefits for the entire length of their notice period.

Sweden has a multi-layered pension system, with up to 18.5 percent of an employee’s ‘pensionable income’ into the Swedish government’s state pension schemes. On top of this, some employers offer additional private pension schemes to their employees.

Income tax should be deducted from every employee’s paycheck and paid to tax authorities, but the withholding amounts vary depending on the individual’s location and wages.

Firstly, all Swedes must pay local taxes at rates which vary between individual communities, ranging from 29 percent to 35 percent. Then, on top of this, higher earners are also obliged to pay national income tax of 20 percent if their annual income exceeds SEK 509,300 (approximately £43,400, $54,000, €48,300). Non-residents must pay a flat tax rate of 25 percent. And additionally, a 7 percent contribution must be made for social security.

Sweden’s tax year runs through the calendar year. Tax return forms are typically issued the following April and must be completed and sent back to the Skatteverket by early May. However, taxes should be paid monthly according to a fixed schedule. This is normally by the 12th of each month, except for January and August when the deadline is the 17th of the month. The Skatteverket requires that the money is received in their bank accounts no later than these days, so it may be necessary to process payments in advance of the due dates.

The Swedish workforce enjoys generous leave entitlements, thanks to the strong protections both for Swedish employees and for foreign nationals working in Sweden.

Employees receive a minimum of 25 days’ paid leave, although the majority of this is taken up by four weeks’ continuous ‘main vacation’. This is normally taken between June and August, and employers determine when these vacations can happen and notify the workforce with at least two months’ notice.

Some unused vacation days can be carried over by employees for as much as five years. Employees that join a company after August 31st are only entitled to five vacation days that year. But all employers are obliged to allow leave for Sweden’s 16 public holidays each year.

Sweden offers some of the most generous parental leave entitlements of any country in the world. Couples can take up to 480 days of leave in total; some of these are parent-specific (90 days for each parent) while the rest is more flexible. Parents receive almost 80 per cent of their salary while taking parental leave, although this is capped at SEK 1006 per day (approximately £86, $108, €95).

Sweden’s liberal approach to business makes it a prime candidate for expansion for any internationally-minded business. However, the complexity of some of its legal requirements and employer commitments, especially around the monthly reporting and payment of taxes, can create some difficulty from an administrative perspective. It’s in these areas specifically that partnering with a trusted managed service provider to manage your outsourced global payroll operations can be a real asset to your organization.