Understanding Payroll in Mexico: What Global Companies Need to Know

Mexico has emerged in recent decades as one of the biggest and most exciting places to do business in the Americas. With its population of around 130 million people, and strong links with both South America and the United States, it offers a wealth of opportunity for multinational companies looking to expand.

Mexico has the 15th largest economy in the world by GDP, and the 11th largest when purchasing power parity is considered. The country has also enjoyed sustained growth - as of 2020, its economy is around five times the size it was in 1990 - although this growth has stagnated recently. Mexico became the United States’ biggest trading partner in 2019, accounting for almost 15% of the US’s trade with other countries, , and taking almost exactly the same share of American trade as Canada.

The unemployment rate in Mexico has remained low over the last few years (between 3 and 4%) , and has already returned to its low pre-pandemic level; many businesses have built their success on the relatively low wages paid to local workers. This, together with its strong international links, makes Mexico a highly attractive, if not slightly more risky, place for international businesses. Understanding the nuances of Mexican payroll requirements, and how they fit into your global payroll strategy, is one of the first steps on the road to expanding in this country.

The most common types of business entities used by companies in Mexico are Sociedad Anonimo (S.A.), similar to a public limited company, and Sociedad de Responsabilidad Limitada (S. de R. L.), which is a company with limited liability. Alternatively, some companies dealing with non-tangible services, such as accountancy and consultancy, may form as a Sociedad Civil (S.C.). 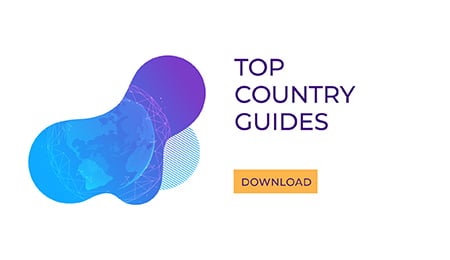 For global companies looking to establish long-term operations in Mexico, business setup is a three-step process. The first stage is to draw up and sign a Deed of Incorporation before a notary public, which requires physical presence of the owners along with their ID and proof of address, as well as the National Registry of Foreign Investment. After registering the business, the company must obtain its tax identification card from the appropriate Federal Taxpayers registry.

In addition, the organization must register as an employer with Mexican Social Security and obtain tax registration from the governing bodies in the local jurisdiction. Once these matters have been addressed, the company should establish in-country bank accounts, which are mandatory for making payments to both employees and the government’s social security and taxation agencies.

To open a bank account in Mexico, a company must supply a Tax Identification Number (Registro Federal de Causantes or RFC) or equivalent, proof of address, banking or commercial references, and formal identification of the organization’s legal representatives or guarantees of a power of attorney. Processes around these vary from bank to bank, although it is likely that the person opening the account will have to physically attend the bank to do so, and potentially provide further information to comply with Mexican anti-money laundering laws.

To comply with labor and social security legislation in Mexico, it is advisable to hire employees through a local subsidiary or a service entity. Employment law in Mexico is designed in such a way as to prevent too many foreign workers taking jobs at the expense of Mexican workers. Companies cannot employ more than 10% of foreign workers, and cannot employ anyone in a technical role that could viably be done by a Mexican. However, these rules do not apply to directors and managers.

New employees can be hired either on a temporary or an indefinite basis, or through a number of contracts that include test periods, training periods, or seasonal work. When hiring a new employee, the worker must provide his or her personal documents, which are necessary for the preparation of employment agreements and to ensure employees can receive payments through the company’s bank account.

It’s important to remember that many people in Mexico don’t have access to banking services, especially as a significant proportion of the workforce is constantly transient in an effort to find work. As a result, they often need to be paid in cash, and so payroll cards should be considered as an option to ensure transparency of wage payments, and to reduce the risk of fraud.
Employees must be registered for social security and insurance on their day of hire. Mexico also legally recognizes workers’ right to form unions to defend their interests.

Employee wages can be paid weekly, biweekly or monthly, depending on the conditions agreed upon in the employment contract. Payments can be made electronically if a new employee asks for permission to process a payroll bank account.

Employees receive a 13th month bonus at the end of the year, which must be paid by December 20. Some employers also pay a 14th month bonus, in which they share 10% of the profits of the previous year; these payments must be made by May 31.

Mexicans work some of the longest hours of employees anywhere in the world. Officially, the maximum working week is 48 hours and is spread over six days of eight-hour shifts. However, many companies condense the 48 hours into five days to give their workers two days off each week. In reality, some businesses choose to ignore these regulations. Overtime is paid at double the normal wage for the first nine hours per week, and triple for anything beyond that.

Mexico has defined guidelines around the ‘justified causes’ for which either the employer or employee can terminate the working relationship without liability. If an employee is dismissed and then argues a justified cause, they are entitled to the following if they are not reinstated:

If the employer argues a justified cause expressly addressed in the FLL, only the last of these categories are payable to the employee.

Employers are required to deduct income tax contributions from their employees’ paychecks, and these payments must then be submitted to the government each month. Mexico has a progressive income tax rate, with the amount required from each employee determined by their salary.

Employers must file an annual statement of wages and salaries paid each year by February 15 of the following year with the SAT (Servicio de Administración Tributaria), Mexico’s federal tax collecting administration.

Paid leave in Mexico increases on a sliding scale, based on an employee’s length of service. Employees are entitled to six working days off per year after their first year of continuous service, gradually increasing to 16 days per year, after ten years. Employees are entitled
to their usual pay plus a 25% vacation bonus, known as the ‘prima’, on these days. Some companies do offer more than this, either voluntarily or through a collective bargaining agreement with unions.

Mexico has seven days of public holidays each year. There is also a public holiday on December 1 every sixth year to mark the presidential inauguration - with the next due in 2024, and then 2030. Employees who work on these days are entitled to 300% of their normal wage, or 325% if the day in question is a Sunday. Several other national, regional and religious celebrations occur throughout the year, including six unofficial public holidays that are widely observed, but workers are not entitled by law to paid leave for these events.

When an employee is pregnant, she is entitled to leave and benefits for six weeks either side of the birth. This can be altered to move some of the pre-birth leave to after the birth, with the permission of the employer. The employee receives 100% of their salary as a social security payment during this time. Additionally, during the three months prior to the due date, pregnant employees are banned from ‘excessive’ physical labor in the workplace. Paternity leave entitlement is five working days following a birth or adoption.

Sick pay is paid to employees from the fourth day of their absence from work up to a maximum of a year. It is paid at 60% of their salary, as long as they made social security payments in the four weeks prior to the illness in question. Should an accident or illness occur in connection with the job or commute to or from work, the employee will receive a subsidy of 100 percent of their salary.

Some of the procedures involved around payroll in Mexico, particularly those around cash payments and banking, may seem unusual to businesses used to operating in fully developed markets. But this shouldn’t deter you from expanding into Mexico. The benefits and opportunities for doing so far outweigh any administrative complexities.

To ensure you get off on the right foot and maintain full compliance with Mexican regulations, a global payroll provider can give you the benefit of their local expertise, along with unified standards for every country you operate in.